Imagine living through 9/11 and the government not having banned box cutters on planes. Well, we have lived through COVID and COVID fascism, which together are responsible for killing and injuring millions of people, yet the same people, processes, and powers behind those policies not only remain unpunished but are now empowered to force their products on schoolchildren with complete immunity from liability. Where is the Republican rallying cry to end immunity for Big Pharma and the bio-security state?

We have all seen those endless Toyota airbag recalls or car seat recalls where manufactures, usually based on very limited risk, must spend millions to compensate for faulty products and perfect them. That is the accountability that exists in every sector except for vaccines. The two culprits behind this are the 1986 National Childhood Vaccine Injury Act (NCVIA) and the Public Readiness and Emergency Preparedness Act (PREP Act). The former exempts all vaccines on the childhood schedule from any liability or judicial discovery process, and the latter exempts any therapeutic or individual involved in a public health crisis during a declared emergency from liability for negligence.

Here we are two and a half years later, and even the most conservative estimates show millions were seriously injured by the shots and tens of millions had reactions to them. Yet the more the virus becomes an endemic, non-emergency virus, the more medical officials continue to grant new authorizations to versions of the shot that have even less data backing them.

On Wednesday, the CDC’s Advisory Committee on Immunization Practices (ACIP) met and voted unanimously to add COVID shots to the Vaccines for Children program, which will pay for children to have endless clot shots. It’s widely expected that later today, the shots will be added to the childhood vaccination schedule, which will induce states to prevent children from going to school without them. It will consist of likely two or three COVID shots a year for the first 18 years of a person’s life — of the most dangerous shot in human history.

The real reason they are doing this is to ensure that the manufacturers are permanently protected from liability, even after the declared emergency is terminated and they lose their protection under the PREP Act. With the shot added to the regular childhood schedule, it would be protected under the NCVIA. Name me the Republican in leadership who is even promising to rescind this power and the immunity that goes along with it.

It would be bad enough to exempt the manufacturers from liability, but to mandate the shots on every child in order to attend school while holding the manufacturers exempt from liability is genocidal, especially given that we already know these shots cause a mind-boggling degree of injury. According to the CDC’s own V-Safe pharmacovigilance, 7.7% of those who got the shots sought medical attention for injury. A new Saudi survey shows that between 7% and 13% experienced chest pain, irregular heartbeat, or shortness of breath, aside from the massive percentage who experienced flu-like symptoms.

Thus, we should be discussing making criminals of those behind making these shots, not rewarding its makers by essentially criminalizing children and families for not playing Russian roulette with their bodies. Mandating the use of a private product in order to participate in life and then absolving the maker of that product of all liability – even after ubiquitous injury has been established – is the most odious form of fascism imaginable.

Where is the GOP? Where is Republicans’ promise to block such mandates? How come Florida is the only state to have publicly commented on the ACIP’s impending recommendation and say that Florida will not be following it? Moreover, states have an obligation to update all of their vaccine policies. What we’ve learned from the COVID shots is that any vaccine that actually works should protect its users from those who opted not to get it. The vaccines either work or they don’t. No child should be denied entry into school on account of not having gotten a vaccine. There are already 54 jabs on the childhood schedule, the COVID shots could add two dozen more, and the industry is about to release numerous new vaccines of dubious justification and proof of safety. The time has come to apply the brakes to this runaway train.

Then there are the two liability exemption bills. There is simply no reason why vaccine companies, flush with cash beyond belief and backed by government funding and recommendations (if not mandates), should be absolved from liability. Gone are the days when it was a fledgling industry with just a few shots on the market. Now Big Pharma controls the world and every global government, including even some of those governments’ military assets as liens to the pharmaceutical companies. It is simply indefensible to continue blanket liability immunity.

Besides, in exchange for liability waiver was the fact that the government would studiously monitor and respond to VAERS reports to immediately pull a deficient product. Here we are with millions of adverse events in VAERS and over 70 million in the CDC’s V-Safe, including countless deaths and debilitating injuries, and yet they seek to expand immunity rather than repeal it? 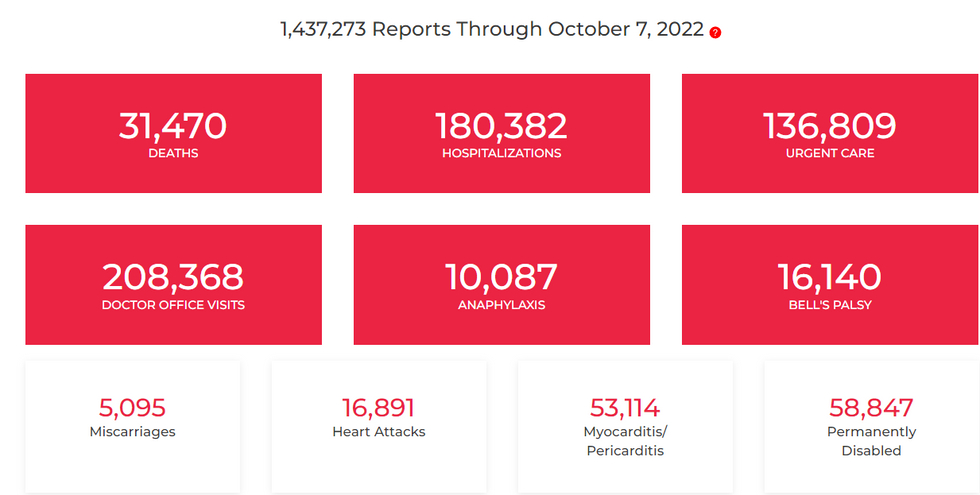 Then there is the PREP Act. It has exempted all pandemic-related malfeasance, including much of the nursing home genocide, from liability. Yet when Biden slipped up and conceded that the emergency was over, and his administration continued the emergency declaration for another 90 days, Republicans passed the budget CR without any protest.

Just how deep does the PREP Act run? Not only has it exempted all makers of defective products like the vaccines and remdesivir, but it even exempts some administrators who gave wrong versions, doses, or concoctions of the therapeutics. For example, there have been numerous examples of children being given adult doses at pharmacies. The North Dakota Department of Health stored thousands of doses at the wrong temperature, according to a new report.

Will anyone be held accountable? Well, the State Appeals Board in Iowa rejected compensation claims for 52 prisoners who were given as much as six times the dosage. The lawyers advised that under the federal Public Readiness and Emergency Preparedness Act, “the state is immune from claims arising out of administration of the COVID-19 vaccine.”

More broadly, of the millions injured, and even among the thousands who filed painstaking claims meeting the very narrow eligibility thresholds for compensation, almost none have been compensated, even as other countries begin paying those injured by the shots.

For Republicans to not even campaign on ending blanket vaccine/pandemic immunity, investigate the entire response to and creation of COVID, and compensate those injured by the shots is shocking. And it’s exactly why the pharma fascists are plowing ahead with even more mandates. They know their products are beyond scrutiny from either party. After all, it’s only the bodies of every child born in this country at stake. No big deal.

Horowitz: Create the illness, mandate the cure. What is causing the explosion of RSV?

Horowitz: 2023 over 2025: How Trump and DeSantis can make the presidential election irrelevant — in a good way

Horowitz: Paxlovid and the need to end human experimentation

Horowitz: Sudden deaths and pregnancy problems finally recognized, but the cause? Not so much

Horowitz: The bio-weaponization of the flu shots

Horowitz: What is the conservative plan to deal with Biden’s Fourth Reich?

Load more
Get the Conservative Review delivered right to your inbox.

We’ll keep you informed with top stories for conservatives who want to become informed decision makers.

'How RIDICULOUS do we look?': World leaders are openly mocking America — and it's really no wonder why

Horowitz: What did Pfizer know and when? 3 important findings from recent document releases

James Cameron — yes, the guy who directed 'The Terminator' — now says testosterone is a 'TOXIN'

After seventh child dies in UK from strep throat complications, experts warn parents to be on the lookout for serious complications